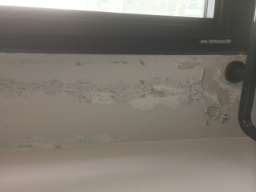 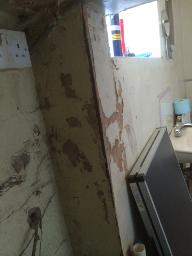 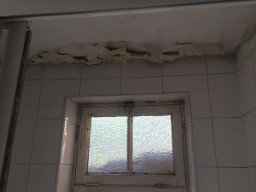 Black Spot Mould and Condensational Issues are usually related - high levels of water content (humidity) within the air often cause condensation. All buildings contain mould spores that are completely harmless and lie dormant but given the right conditions these spores can develop into large areas of black mould accompanied by a musty damp smelling odour.

A1 Damp Proofing Solutions will carry out a Relative Humidity Test in order to determine whether the cause of the damp is due to water content within the air or another issue such as Rising Damp. Many companies will not carry out a Relative Humidity Test as condensation (air water content), and Rising Damp all show the same symptoms, this can lead to work being completed incorrectly on a problem that does not exist, thus leading to further issues with black mould and the problem never fully being remedied.

The following percentages show the different levels of water content in the air and the problems this can create:

The Signs of Black Mould & Condensational Issues in a property are:

Upon completion of a full Relative Humidity Test the following process is undertaken to remedy the Black Spot Mould.

Before any remedial work is completed the original cause of the Black Spot Mould will need to be investigated and resolved first, usually related to condensation additional air vents and ventilation systems will be required to reduce the water content within the air. Removal of any damp sources such as LPG heaters, leaking pipes, and even damp clothes hanging indoors with no ventilation.

Black Spot Mould can be cleaned off using anti-microbial sprays and treatments specially formulated for toxic mould, after removal all areas are treated with specialist fungicidal paints and coverings that will prevent the return of the mould. Any items that have been affected by black mould such as furniture and carpets should all be discarded. Woodwork that has been affected will need to be cleaned and sanded down if possible to fully remove the mould.

Ventilation is key to dealing with most condensational issues, and in making a successful basement conversion. A1 Damp Proofing Solutions understand this and thats why we recommend and install single room heat recovery units (SRHRU for short).

These units monitor the moisture in a room and when the moisture rises above 30% then the unit turns on to overboost mode and removes the moist air, however the unit retains the heat of the air and passes that back into the room through its heat exchange unit. 87% of the heat is retained compared to a normal extractor fan. These units are particularly affective in highly moist areas such as kitchens, bathrooms and cellars.

Black Mould can cause serious health risks and problems if left untreated. Respiratory issues and asthma are the main causes but allergic reactions can also be problematic to health resulting in rashes and stinging eyes. In extreme cases food poisoning can be triggered due to the mould spores affecting food and creating harmful toxins. Even small amounts of active spores within the mould can be detrimental to health.

Please contact us and we can provide a full report on the condition of the mould within your rented property, this can then be submitted to the landlord for action to remove the problems.